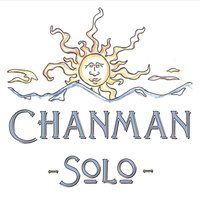 Peter "Chanman" Chandler is a singer, songwriter, guitarist, and bandleader living in Jackson Hole, Wyoming. He's been playing "ski bum music" throughout the Rocky Mountains for 25 years and has won "Best Musician" three times in the "Best of Jackson Hole".

Chanman grew up on the coast of Maine and began singing at an early age. By high school, he was involved with advanced singing groups and performing at parties. He moved to the mountains of western Wyoming as a teenager to ski the Tetons. Skiing and music have long been his passions and he continues to live that dream.

Chanman graduated from Marlboro College in Vermont and holds a B.A. in Religion. He studied Christian, Native American, and Greek philosophical thought. One of his professors, James E. Thomas, continues to be his minister and mentor. After two more years skiing in Jackson Hole, he attended Harvard Divinity School in Cambridge, MA and earned a Masters of Divinity in 1990.

Returning to Wyoming in the early 1990's, Chanman worked as a youth counselor and minister, painted houses, and began his career as a mountain musician. He founded the Ski Bum Music Festival which featured local ski bands and donated to organizations including Search and Rescue and the Avalanche Center. He has published three CD's as a singer/songwriter. His most recent "Chanman — Solo", "Gotta Take Some Turns", and "Perfect Thirst".

Tram Jam, sponsored by Stio outdoor clothing and Zeal sunglasses, has been performing "all-weather mountain music" on Saturdays at the base of the Jackson Hole Mountain Resort for 23 years. They play outdoors during ski season (no matter what the weather brings) playing rock, reggae, and many Chanman originals.

Chanman Roots Band, led by Chanman, was founded 2006. This 9-piece reggae band has played festivals and venues throughout Wyoming and beyond, including Donkey Creek Jazz Festival, No Woodstock Festival, Prairie Wind Multi-Cultural Festival, NOLS annual meeting, Greater Yellowstone Coalition's Bike Tour, and many more. Their CD  "New Uprising" was awarded gold in 2012 for "Best Local CD" in JH Weekly's "Best of Jackson Hole". Chanman wrote all the songs on the CD.

Chanman also performs old time jazz as Papa Chan. For the past 5 years, he has played every Friday (in season) at the Teton Pines Country Club with upright bassist Johnny C Note. They keep the Great American Songbook alive and kicking in Jackson Hole.

Chanman played with the rock/reggae group Waist Deep from 1998 – 2006. They have one CD entitled "Ski Bum Music". Their music is featured in the film "Swift. Silent. Deep. A History of the Jackson Hole Air Force".